TIM TEBOW: A STORY OF FAITH


In a recent email, I read about a woman named Pam, who knows the pain of considering abortion. More than 24 years ago, she and her husband Bob were serving as missionaries to the Philippines and praying for a fifth child. Pam contracted amoebic dysentery, an infection of the intestine caused by a parasite found in contaminated food or drink. She went into a coma and was treated with strong antibiotics before they discovered she was pregnant.

Doctors urged her to abort the baby for her own safety and told her that the medicines had caused irreversible damage to her baby. She refused the abortion and cited her Christian faith as the reason for her hope that her son would be born without the devastating disabilities physicians predicted. Pam said the doctors didn't think of it as a life, they thought of it as a mass of fetal tissue.

While pregnant, Pam nearly lost their baby four times but refused to consider abortion. She recalled making a pledge to God with her husband: If you will give us a son, we’ll name him Timothy and we’ll make him a preacher.

Pam ultimately spent the last two months of her pregnancy in bed and eventually gave birth to a healthy baby boy August 14, 1987. Pam’s youngest son is indeed a preacher. He preaches in prisons, makes hospital visits, and serves with his father’s ministry in the Philippines. He also plays football. Pam’s son is Tim Tebow.

The University of Florida’s star quarterback became the first sophomore in history to win college football’s highest award, the Heisman Trophy. His current role as quarterback of the Denver Broncos has provided an incredible platform for Christian witness. As a result, he is being called The Mile-High Messiah.

Tim’s notoriety and the family’s inspiring story have given Pam numerous opportunities to speak on behalf of women’s centers across the country. Pam Tebow believes that every little baby you save matters. I pray her tribe will increase!

May the peace of our Lord Jesus Christ be with you always!


Denver Broncos quarterback, Tim Tebow announced that the Tim Tebow Foundation, working with CURE International, will be building a new children’s hospital in the Philippines. The Tebow CURE hospital is the first joint project between the two organizations. When completed, the hospital will feature a 30 bed surgical facility, with a primary focus on orthopedics. The groundbreaking is scheduled for January and the hospital is expected to be completed in 2013.

Here is an "OLD" sports article about him when he was still in college. Although the article is old, it will give you a background on his Philippine connection.

Amidst the roaring chants of adoring fans, Tim Tebow towers like a giant in the football field as he directed the offense of his collegiate championship team, the University of Florida Gators. He was the first college sophomore to win the much-coveted Heisman Trophy, given to only the best college football players, he can stand as an equal to such football legends as Mike Ditka, Joe Schmidt, or Joe Montana. But Tim’s personal story goes beyond football. His other greatness lies in walking around as a virtual unknown in the muddy streets, dirty markets and slums of Mindanao where he preaches a message of love to those whose lives are mired in misery and poverty. My conception and birth were beautiful stories of life. They were not stories about choices. They were stories of my parents selfless love of life and their unwavering faith in God who knows and sets the bounds and ends of our lives says Tim, in describing the agonizing circumstance and joyful outcome of his birth in the Philippines, where his parents, Bob and Pam Tebow, worked for five years as Baptist Church missionaries in South Cotabato, Mindanao some 24 years ago. Because of the poor sanitation that was and still is a common situation in the rural areas of the Philippines, Tim’s mother contracted dysentery while pregnant with him. She fell into a coma. To combat her infection, her Filipino doctor administered a high dose of antibiotics that triggered the side effect of placental abruption.

The Philippines, a predominantly Catholic country, outlaws abortion except in cases when the life of the mother is endangered. Thus, the attending physician of Pam Tebow recommended abortion. But my Christian faith led me to decide otherwise, says Pam. I was flown to Makati, the country’s business capital, to seek the second advice of a medical specialist. With my strong trust in God and in the power of prayers, and encouraged by the care of my new doctor, I carried Tim to term and delivered him a normal infant. That baby who was at first handed a stillbirth sentence in the Philippines would later carry a U.S. college football team to two national championships and is marked to go down as one of the greatest players ever to play the game of football, says Urban Meyer, head coach of the  University of Florida Gators, the 2006 and 2008 Bowl Championship Series (BCS) collegiate champion, with whom Tim has played as quarterback.

Twenty years after his birth in the Philippines, Tim grabbed the sports headlines in the U.S. by contributing as a key reserve in the 2006 collegiate football national championship against Ohio State University. In that championship game, he threw for one touchdown and rushed for another, finishing with 39 rushing yards, which helped secure the 41-14 victory for his Gators team.

My parents moved back here in the U.S. when I was three years old, Tim recollects. As I was still a toddler when I was there, I have vague memories of my having lived in the Philippines, except perhaps my having been in the care of my Filipina yaya (babysitter). But one thing for sure, I have a deep attachment to the country and its people. I have been joining my dad’s Christian mission to the Philippines every summer these last four years, and these trips have been my eye opener to the things that need to be done for the less fortunate people, especially children, in that part of our world. What Tim’s dad started in the Philippines some twenty years ago as a young missionary is now a strong and established ministry of 45 Filipino evangelist staff and 13 workers now funded by the Bob Tebow Evangelistic Association of Jacksonville, Florida. It’s located in Cotabato in Mindanao the hotbed of the southern Muslim insurgency. The mission is about bringing the faith of Jesus and the goodwill of the American people to over 15 million people in the island.

Through our church planting ministry, we have worked with over 10,000 local churches in the Philippines to build new churches. We also work closely with a local seminary to train local pastors. We hold seasonal charity clinics to provide free healthcare services and distribute medicines to poor people who can’t afford to see a doctor, much more, buy medicines, says Tebow’s dad, Bob. We also have built an orphanage, the Uncle Dick’s Home, that now houses more than fifty homeless orphans. Every summer, when schools are on break, Tim goes to that barangay (barrio) in the Philippines where his dad had set up his mission. There, as a virtual unknown and away from the media spotlight, he walks the streets of Cotabato and visits the markets of Digos with the Holy Bible in his hand to preach the gospel of Jesus. He saddles homeless kids on his shoulder in the slums of Sarangani and plays kuya (big brother) to them while handing out candies and chocolates. He bathes in cold water just like the natives do, and runs errands for volunteer doctors and nurses who perform surgeries on indigent patients in makeshift operating tables.

A world away from their home in Jacksonville, Florida, that faces the Atlantic, Tim finds himself in a different playing field in the island of Mindanao that is nestled in the
Pacific. It is a much different ballgame, he says. There, I hear no roaring chants from fans rooting for a touchdown, but deafening silence as people desire to receive the words of Jesus that I preach about. I see none of those eyes of adulation when we win games, but eyes of faith of people searching for Jesus who I talk about, Tim relates. You kind of find out from the get-go, what sets faith apart and what a game is just about. With all his outstanding achievements in football, Tim will definitely emerge as the top NFL draft pick of his 2010 class as soon he steps out of college. But he has set his sight and his heart on other things, too that little orphanage of more than fifty children in Mindanao that his father had founded. Those kids make me more grounded and help me put things in proper perspective, he says. At the end of the day, what matters may not only be about scoring a touchdown, but also winning the future of those kids who do not get the opportunity to receive that touch of hope and love that you and I may have the means of giving.

(Tebowing has now become an official word and has entered the dictionary. he does this every time he scores a touchdown (kneels, bows and prays). He wears his faith on his sleeve. 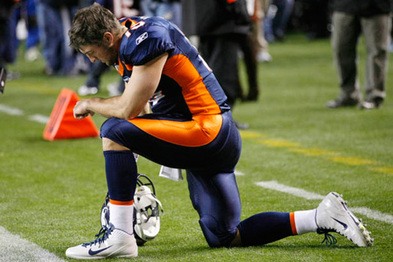 ​When Her Ex-Husband Went On A Violent Rage, Her Kids Did The Unthinkable.
http://www.newsner.com/en/2016/06/when-her-ex-husband-went-on-a-violent-rage-her-kids-did-the-unthinkable/